Benjamin and the Third Reich

July 18, 1937 marked the opening day of the “House of German Art,” a neo-classical styled grandiose stone temple, and the “Great German Art Exhibition” that boasted 16,000 works (Adam 94). On the following day, the Nazi party began an annual tradition of exhibiting more than 5,000 pieces of “degenerate” art, which was attended by more than 2 million German citizens (Petropoulos 57).

When I first learned about this obsession with art in the Nazi regime, my first thought was, “That’s so weird, why would the Nazis care so much about determining “good” and “bad” art? Does it really matter that much how someone paints or sculpts something?” Why did the Nazi Regime value artwork so highly? I believe that part of the answer lies with Benjamin. The author warned that without the politicization of aesthetics in an era of the technological reproduction of art, that society would unknowingly leave itself vulnerable to the devastating forces of fascism. Unfortunately, Germany did not heed this warning, and was awesomely manipulated by the fascism of the Third Reich. With the help of Germany’s ignorance of the separation of art from its unique existence and tradition, the Nazis were able to create their own tradition of art. The Nazis were able to "reorganize" the people's perception of what constituted "real German art," and what did not.

In “The Work of Art in the Age of Its Technological Reproducibility,” Benjamin claims that, when art is technologically reproduced many times over, the unique existence of the artwork – “the here and now of the original [image]” (21) – turns into a mass existence. When this happens, the work of art no longer belongs to a specific time and place, and is severed from its unique existence (and also from its tradition, which is founded upon the work’s unique existence). This detachment of the tradition from an artwork is particularly problematic given that human perception is "organized" by tradition and history - the tradition of the work of art conditions an individual how to interpret the respective piece. Therefore, when the tradition is utterly disconnected from the work of art (which is an unavoidable consequence of mass technological reproduction), an individual's perception of an artwork is unfounded, and thus easily manipulated if left unchecked and unnoticed.

In order to combat this ignorance of the detachment of art from its unique tradition, the society must politicize its aesthetics. This is exactly what Expressionism sought to do. After the end of the World War I, Germany lay in economic and social ruin: the great expectations that Germany had for the war (as the solution to their economic and political problems) proved disastrously false. Many Expressionist artists came back from the front lines forever changed: the darkness of war had changed the artists’ perceptions of art, humanity, German society, and themselves. The artists expressed onto the canvas their disillusionment of war, self-doubt, existential ponderings and insecurities, and distrust of absolutes. The art that was produced at this time shows the politicization that infused these artists’ works.

(For the following images, I've tried to limit my comments, so that you can interpret the paintings as independently as possible) 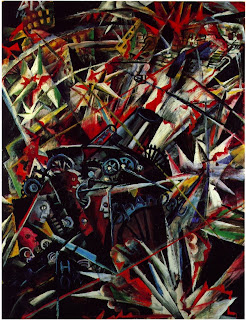 "The War" Otto Dix, 1920
(Shows the mechanization of war and the fragmentation that is created. Also, note the hostile and violent images) 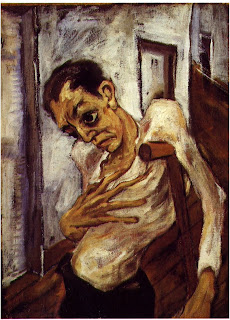 "After the War" Will Küpper, 1919
(The figure's eyes are disproportionately large, and his long fingers seem to mesh into his skeletal figure) 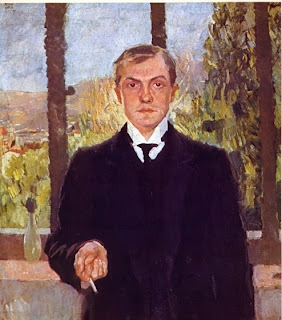 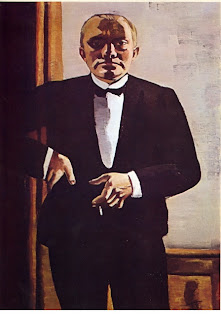 Right: “Self-portrait in Tuxedo” Max Beckman, 1927
(The figure is positioned beside total darkness, which literally cuts him in half. The figure seems more closed-off and dark)


Because of this misplaced cult value projected onto the artwork, the German masses could be manipulated into thinking that Hitler’s "reality" was more real than actual reality. In the year 1937 in Munich, the Nazis presented “Entartete Kunst” – a “degenerate art” exhibition where thousands of Expressionist works of art were chaotically presented, unframed, clustered, and badly lit, next to captions that emphasized the “perverse Jewish spirit” supposedly captured in the paintings. On average, 20,000 people a day came to see the “Degenerate Art” exhibit (Petropoulos 57). 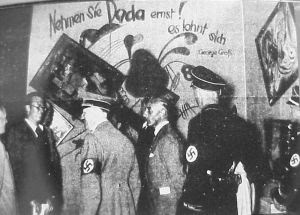 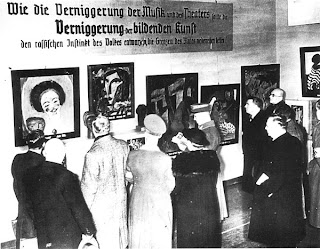 “You see about you the products of insanity, of impudence, of ineptitude, and of decadence.” (Grosshans 105)

--Adolf Ziegler (chief organizer of the “Entartete Kunst” exhibition), in his opening address of the “Degenerate Art” exhibit.

According to Walter Benjamin, the apparatus of film and photograph is so intimately embedded in reality, that it seems to portray a "pure view of reality". However, this presentation of reality as equipment-free is possible only through editing, lights, camera positions, etc. In other words, this "equipment-free" reality is only possible through the "intensive interpenetration" of equipment (30). The “reality” of Hitler’s Germany was presented via deeply penetrating veils and manipulations. The lies that they identified as truth – such as their romanticism of war and the Grecian-styled and Impressionistic art that they claimed as “truly German” – did not have any unique existence within the historical and traditional context of the German nation, and thus were not rooted in reality. Nevertheless, the Nazis gained the authority to determine what was “reality” because although it only retained exhibitionary value, their aesthetic still retained cult value in the minds of the people.